Every dog loves to play fetch, but it requires at least one human to be around to be able to do so. But one resourceful dog came up with an idea to catch people as they’re walking by his gate. He sticks his head out with a toy in his mouth to get them to throw it for him. He’s done this for so long his owner even made up a sign that hangs right above his head on the fence!

The sign reads “Please don’t throw the toy on the cacti (the dog will hurt itself). Throw either left or right thanks.” (Translated from Italian) One day, Caterina Dellabona was walking by and she stopped to read the sign. She was confused at first, but then all of a sudden a dog poked his head out through the gate. The bars are wide enough apart to fit his head through comfortably without allowing his body to slip through. The dog looked up at her with a toy in his mouth while wagging his tail, eager to play. Suddenly it all made sense! She threw the toy, and each time the pup would bring it right back to her ready for more. But eventually she had to move on with her day. 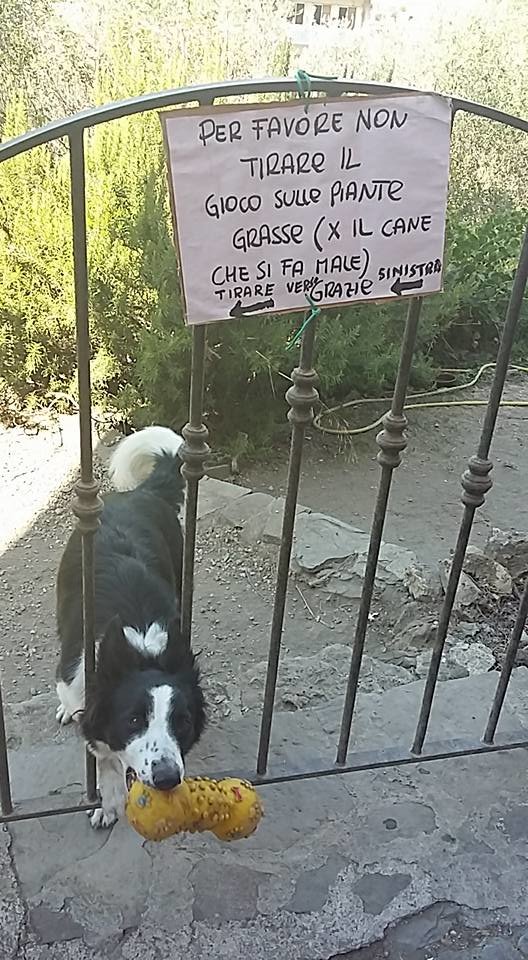 Now Caterina makes it a point to stop and play for a little bit every day. It’s never for as long as he’d like, but I’m sure she’s just one of many friends this dog has acquired over the years! 😉

It makes you wonder how much fetch this smart dog gets to play on a daily basis!