KC is a flat-coated retriever that was born with both eyes but lost one at 2 years old. Then her owners were told that she had only a 5% chance of keeping her other one. This is when they decided to do something that would forever change KC’s life… and forever change their own.

They adopted a puppy named Shadow. But they didn’t expect them to become this close. 🙂

…But it wouldn’t take very long. 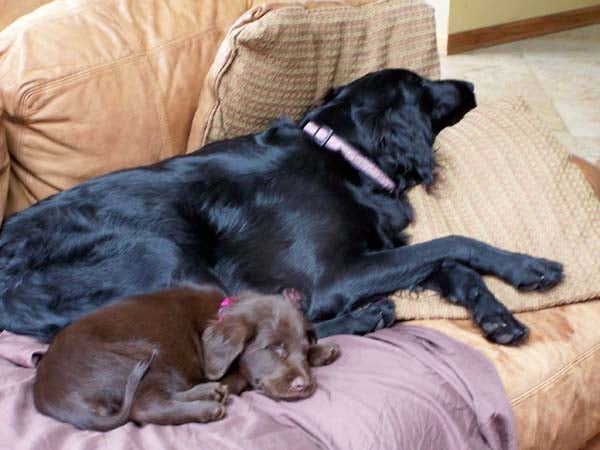 Not long at all, actually. 🙂

…And hang out together by the hot tub.

Then KC lost her second eye.

But that didn’t matter to Shadow…

…And it didn’t stop KC from fetching, one of her favorite activities.

While Shadow got pretty busy being a show dog…

…It didn’t stop them from spending time together.

They did some more sleeping together…

…And just spent some time relaxing and hanging out. 🙂

The incredible bond between these two is one for the ages.

Then Shadow got pregnant, and she would have puppies who would grow up together and share that same bond. 🙂

This heartwarming friendship shows the personalities and feelings that dogs can have for one another. Many thanks to their owners for sharing such a great story.